Advertisement
Sydney's only on-site airport hotel, Rydges Sydney Airport Hotel, is set to open at the international terminal in May, creating a hub for both local and international business and leisure travellers and another first for the city.

Sydney’s only on-site airport hotel, Rydges Sydney Airport Hotel, is set to open at the international terminal in May, creating a hub for both local and international business and leisure travellers and another first for the city.

The Rydges Sydney Airport Hotel is expected to open at the International Terminal in May.

The 4.5 star, 318 room hotel will boast the highest standards in environmental practices, IT connectivity, food and beverage offerings. Set over 11 floors, it will house a restaurant, sports bar, gym and 11 different spaces for functions and events, including rooftop spaces with breathtaking views of the international runway, surrounding area and city skyline.

“The hotel is set to be a hub not just for travellers, but also interstate and overseas business guests,” said Tish Nyar, general manager for Rydges Sydney Airport Hotel. “Being conveniently located just ten minutes from Sydney CBD by train and right next to both terminal buildings, the hotel is the perfect location for people coming to Sydney and looking for somewhere to hold a meeting or function that is more easily accessible than the usual Sydney venues and offers great parking rates.” 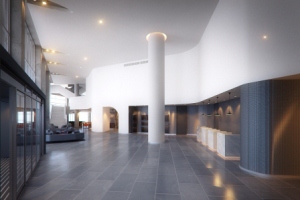 Inside the lobby at the Rydges Sydney Airport Hotel.

The rooms themselves offer seven different layouts from the Superior Queen Room to Deluxe King Suite, all equipped with Rydges Dream Beds. Despite being situated right at the terminal, special glass has been installed so that the noise levels are lower than most city hotel rooms and direct views of the runway can be enjoyed in peace.

Offering guests and visitors a tasty alternative, the hotel’s restaurant – The Blackwattle Grill – will specialise in modern Australian cuisine with a seafood accent. Meats and seafood from the grill will be complemented by lighter choices, perfect for those about to board a flight. The restaurant will also provide the food for 24-hour room service.

The more casual Champs Sports Bar will boast over-sized plasma monitors, showing all the latest sports from around the globe, as well as important airport and flight information. There will be plenty of ice-cold Aussie beer on tap, as well as a substantial bar menu.