Advertisement
Singapore Airlines has doubled its Airbus A380 superjumbo offering on Sydney flights, offering another 140,000 seats annually on the key route.

Singapore Airlines has doubled its Airbus A380 superjumbo offering on Sydney flights, offering another 140,000 seats annually on the key route. 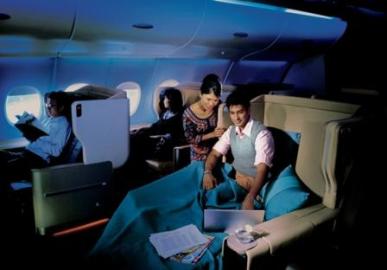 Singapore Airlines’ new Business Class on the Airbus A380

With four daily flights between the two cities, Singapore Airlines is the largest operator of services on the route and has replaced an afternoon Boeing 777-300ER with the additional A380.

“The launch of this second A380 service is in response to the growth in demand we are experiencing on the Sydney-Singapore route,” said Singapore Airlines’ Regional Vice President South West Pacific, Subhas Menon.

“As the first airline to fly the A380, we began the super-jumbo services on this same route in October 2007.

“This second daily A380 will make travel between Singapore and Sydney easier and more convenient for both business and leisure travellers with onward connecting flights from Singapore, particularly to Europe,” he said.

The new A380 service, SQ222, departs Sydney at 4:30pm and arrived into Singapore at 9:40pm local time, while on the return leg, SQ231 departs Singapore just after midnight and arrives into Sydney the same day at 11:25am.

Singapore Airlines’ A380s feature private Suites in a level above first class, the widest seats in Business Class and newly-designed seats in Economy. Food from Aria Restaurant’s Matt Moran is featured in the Suites and Business Class and from early 2011, customers in all classes will be able to access a range of new onboard communication, including Wi-Fi and mobile phone services.