Advertisement
Queenstown is set to get an 1800-capacity convention centre, with stage one due to be completed in 2016. 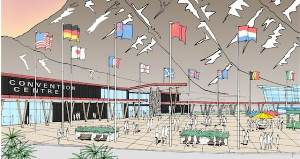 By James Wilkinson at Meetings 2014 in Auckland

Queenstown is set to get a convention centre in 2016, with plans for stage one of an eventual 1800-capacity venue set to be lodged with council on June 24.

The news was revealed today (June 19) at the Meetings 2014 trade show in Auckland and quickly became the talk of the event.

“We just don’t have something of this size in Queenstown,” he said.

Porter said two stages were planned for the centre and stage one, for which plans were last week reviewed by a joint Queenstown Lakes District Council and Remarkables Park Design Review Board (DRB), would be 2,700sqm in size.

He said Stage One, which is expected to see construction starting in autumn 2015, would be capable of hosting “900 people lecture-style, followed by 600 for dinner plus 50 to 60 full-size exhibition booths”. A standalone dinner, he said, could cater for 900.

“Stage Two, which has been designed to cater for future growth and development, would increase that capacity by more than 50 percent,” Porter said.

The scheduled completion in the second half of 2016 would coincide with the expected commencement of night flights to and from Queenstown, a move that will boost MICE and leisure business in the area.

Porter told Spice the “the timing of it is all right” and the night flights would boost business from the Australian market, one he said should deliver “strong demand”.

“Its exciting news for Queenstown that we’re underway with this much sought-after facility and we’re really pleased to now be able to show people what we’ve been working on,” he said.

“We’ve got a striking building in a beautiful location looking out to The Remarkables mountain range, Coronet Peak and Ben Lomond.

“The emphasis has been on developing a functional design to provide a very flexible-use format following months of behind the scenes research, consultation and hard work.

“This centre is in a warm and sunny location and is part of a major expansion of the Remarkables Park Town Centre. The immediate proximity of this town centre helps underpin the convention centre development,” he said.

Porter said few convention centres in Australasia would be able to offer what Remarkables Park can.

Porter said Stage One of the centre would have two adjoining conference spaces, breakout rooms, an exhibition and pre-function foyer. It will be a flat-floor facility to enable maximum flexibility, and the building will have an overall height of around 12m. Spice travelled to Auckland with Air New Zealand. In Business Class, Air New Zealand offers world-class food and wine that highlights the best New Zealand has to offer, while also not compromising on comfort with flatbed seats which feature super-comfortable seat-toppers, large pillows and duvets. You won’t get bored, with hundreds of hours of entertainment available on demand. Visit www.airnz.com.au