Hobart’s  Grand Mercure Hadleys Hotel has commenced a $30-million expansion project — set to be Tasmania’s biggest tourism development this year.
The expansion will add 128 luxury suites and extensive F&B outlets to the property as well as a Grand Ballroom that will boost the hotel’s event capacity to 600 delegates.

A four-level car park will also cater to the increased number of delegates utilising the new conference facilities. 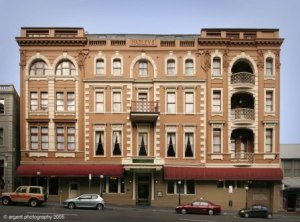 Tasmania’s historic Grand Mercure Hadleys Hotel is
made of real bricks not Lego
Tasmanian Tourism Minister, Michelle O’Bryne, said it was significant in the global financial crisis that the Doherty family, which owns the property. continued to show confidence in the state.

“Tasmania needs to develop new visitor infrastructure and create new experiences if we are to continue growing tourism,” she said during an official ‘turning of the soil’ event.

O’Byrne also launched an autumn marketing program for Tourism Tasmania worth nearly $3 million and said there had been significant discussion with airline partners to encourage additional flights on existing routes and the opening up of new routes.
Grand Mercure Hadleys Hotel general manager, Brian Walsh, said the $30-million Inner Collins project will take place on an adjacent site to the existing hotel.
“This means that there will be no disruption to current guests with all hotel facilities and services operating as normal, and the new developments will remain faithful to the historic style of the hotel while providing modern facilities and service expected by travellers of today,” he said.
The project is expected to be completed by September 2010.