Advertisement
Fraser Suites Perth, the first five-star all-suite apartment hotel to be built in the city in over a decade, officially opens its doors this month.

Fraser Suites Perth, the first five-star all-suite apartment hotel to be built in the city in over a decade, officially opens its doors this month.

The 19-storey property in East Perth is the 3rd opening in Australia for Frasers Hospitality and features 236 five-star residences.

Like the other stylish hotels in the group in Melbourne and Sydney, Fraser Suites Perth is situated in a prime location close to the city’s Central Business District and major tourist attractions including the world-famous WACA cricket ground and Langley Park. The hotel also occupies an enviable spot within the Free-Transit Zone and is just a stroll away from Adelaide Terrace, the leading Crown Perth and Perth Convention Exhibition Centre. 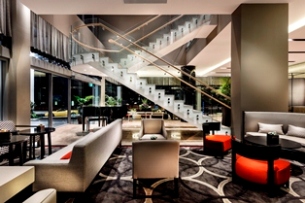 The property offers various types of accommodation – Deluxe and Executive studios and Deluxe and Premier one-bedroom apartments which can be easily connected to create two-bedroom apartments. Each residence at Fraser Suites Perth is beautifully considered and comes complete with integrated open living, dining and kitchen areas.

Designed for comfort and practicality, the studio apartments feature a bright, fresh interior décor with muted tones and harmonious colours, and are equipped with work desks, kitchens, state-of-the-art home entertainment systems. Some also have balconies. What’s more, high-speed free Wi-Fi – a standard across the group.

Business travellers are exceptionally well catered at Fraser Suites with a range of configurable meeting rooms and a Frasers Hospitality meeting package which offers free Wi-Fi, a customised service and an assigned co-ordinator to ensure the success of every business engagement.

Matthew Rubie, Frasers Hospitality general manager Australia, said “The opening of Fraser Suites Perth is in line with our strategy to establish a strong foothold in Australia’s key cities and we are delighted that it is joining our portfolio. The property is in a perfect location for both leisure travellers and business travellers in the mining and resources sectors, and we’re confident it will be a success.”

The launch of Fraser Suites Perth follows the grand opening of Fraser Place Melbourne in October 2012.