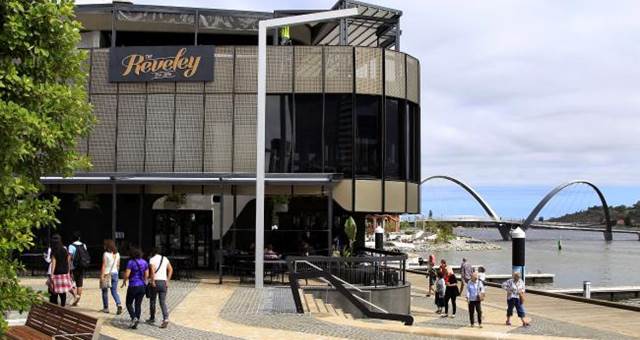 Of the new precinct, Barnett said, “Our city’s hospitality scene has been transformed and is virtually unrecognisable from its ‘dullsville’ days prior to 2009.

“Over the past four years, more than 40 new small bars and upwards of 135 licenced restaurants have opened in the metropolitan area, breathing life back into the heart of Perth after dark, and creating an atmosphere of fun and excitement.”

The Premier said the opening of the two eateries at Elizabeth Quay came after the successful Night Noodle Markets at the waterfront destination.

“About 100,000 people enjoyed the hawker-style markets over the two weeks they were open. And during these school holidays, it is expected 4,000 visitors a day will go to the quay and see the Brick Man Lego-based experience,” he said.

Planning Minister Donna Faragher said the opening of the first two permanent food and beverage outlets at Elizabeth Quay were significant milestones in the continued growth and development of the precinct as a key tourist destination.

“Elizabeth Quay has attracted a significant number of visitors since it opened two months ago and these new eateries are a welcome addition and will undoubtedly enjoy strong patronage,” Mrs Faragher said.

“In the next few months, these new operators will be joined by Gusto Gelato and the Isle of Voyage, delivering even more family friendly fare to the quay.”