Crowne Plaza Christchurch is celebrating a milestone moment as scaffolding comes off the former Forsyth Barr building to reveal new signage and lights.

The eagerly-awaited property – which will be the largest upscale hotel in the Christchurch city centre with 204 hotel rooms – is on track to open in May 2017.

The property is situated at the corner of Colombo and Armagh streets on Victoria Square, opposite the former Crowne Plaza site which was demolished in 2012 following the 2011 earthquakes.

Previously Eulink spent 18 months as General Manager for IHG at Holiday Inn City Centre Christchurch, and before that was Executive Assistant Manager at Holiday Inn Wellington.

Most recently he has spent five successful years leading Queenstown’s Crowne Plaza. During his time in Queenstown the property has won multiple travel and tourism awards.

Eulink said it was an “exciting” time for the Crowne Plaza brand to return to Christchurch.

“Opening a hotel has been a long-held ambition, and I’m delighted to head back to my old stomping ground to support the Christchurch community,” he said.

“The hotel will be a landmark for Christchurch, and it’s an honour to see the Crowne Plaza Christchurch signage standing tall in the city.

“Finally revealing the sign this week is the first step in bringing Crowne Plaza back to the city,” Eulink said.

The property is the city centre’s tallest hotel at 17 storeys. Work on gutting, repairing and strengthening the former office building began last year, including a new scissor stair was fitted in 36 pieces. The hotel also has five lifts.

Work is well underway on the interior with rooms painted and wallpapered and joinery being fitted.

The former office tower is owned by MC Christchurch Holdings, and director Chris Goldsbrough said he was equally pleased to see the new signs up and to hear of Eulink’s announcement.

“As owners, local investors and developers, we’re incredibly pleased to see someone of Reinier’s skillset and experience take the lead,” he said.

“Revealing the new signage marks a significant event in the property’s major refit and we’re thrilled to see the iconic building gain a new lease of life.

“We’re hoping to create a hub for business and leisure travellers and to offer the community a meeting place in the heart of the city.” 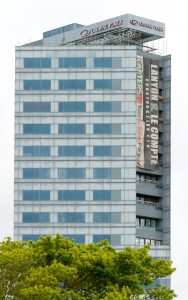 The next stage of the refit reveal includes new glazing and cladding on lower levels, which will be installed in the next few weeks.

“To see the brand once again standing tall in the city will be greatly appreciated by local residents and visitors alike,” he said.

“With the opening of the new Crowne Plaza, the provision of hotel rooms in the city will be back up to around 60% of pre-earthquake numbers. This will make a significant contribution towards the recovery of the visitor economy in Christchurch.

“I’m sure the tourism industry will welcome Mr Eulink back to Christchurch, and we look forward to working with him soon,” Allen said.