Advertisement
The first sod of soil has been turned to commence construction of the new, $68 million Rydges Sydney Airport Hotel, which is set to open in mid-2013.

The first sod of soil has been turned to commence construction of the new, $68 million Rydges Sydney Airport Hotel, which is set to open in mid-2013. 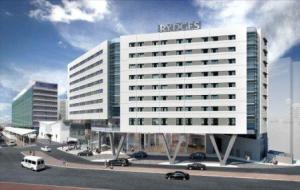 To be managed by Rydges Hotels and Resorts, the 317-room property is being developed by interests associated with Phillip Wolanski, David Baffsky and John Landerer, and built by Lipman Construction.

Managing Director of Amalgamated Holdings Limited, David Seargeant, said the project was a significant one for Rydges.

“This is an important development for the tourism industry,” he said. “The hotel will be built to the highest of environmental standards, with its own cogeneration plant and we will ensure it is operated with true Australian hospitality for both inbound and outbound travellers, whilst becoming a key player in the broader local community.”

Once complete, the 4.5-star hotel, located opposite the international terminal at Sydney Airport, will feature a restaurant, bar, meetings and events spaces, a gym and business centre.

The project has been welcomed by a number of organizations, including Destination NSW and Tourism Accommodation Australia (TAA).

“TAA has always been a strong advocate for the growth of sustainable, long-term supply in the Sydney area,” said TAA NSW Director Carol Giuseppi.

“Sydney Airport is the gateway to the city for international travellers in particular and a new, quality hotel will enhance the visitor experience as well as providing important additional supply for Sydney.

“Last year, almost 12 million passengers flew to and from Sydney Airport’s International Terminal and that number should increase over the next few years.

“Airport hotels in general do very well – according to STR Global figures they had an average occupancies of around 84% for 2011.

“The continuing growth in passenger arrivals and departures from Sydney Airport will continue to drive this demand,” she said.

The first sod was turned by the NSW Minister for Tourism, George Souris, who said the development was a “vote of confidence” in Sydney.

“Passengers will benefit from greater choice and greater convenience with the hotel to be built at the airport’s revamped international terminal,” he said.

“Sydney Airport plays a major role in promoting tourism not only to the Harbour City and the State, but also the rest of the country (and) it is vital that international travellers have a comfortable and friendly experience when arriving in Sydney.”