Advertisement
Every Wednesday at 7:45am, guests at The Byron at Byron gather for Executive Chef Gavin Hughes' farmer's market tour.

BY RODERICK EIME IN BYRON BAY

Every Wednesday at 7:45am, guests at The Byron at Byron gather for Executive Chef Gavin Hughes’ farmer’s market tour. 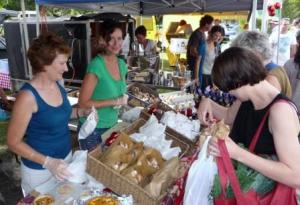 The tour of the Byron Bay markets. Photo: Rod Eime

As a testament to their creativity and social acumen, Hughes involves in-house guests in his own weekly shop for fresh local produce at the popular local market thronged by regional producers and growers.

“It’s our little way of giving back to the community who have supported us in the seven years since we opened,” says Hughes introducing the group personally to the vendors, “just why all regional properties don’t do something like this I don’t know.”

Hughes says The Byron sources over 80 per cent of produce from the local area and about 20 per cent from the market itself. Greens, fruit, nuts, sauces, mushrooms and vegetables are just some of the items he buys every week from the stands.

“This guy here asks me nearly every week ‘what can I grow for you?’”, he says introducing me to Alistair whose stall is awash with bright green organic bok choy and citrus, “here’s a bag of zucchini flowers he produces especially for us. We deep fry them in our tempura batter.”

Further along, past an interesting gent singing carols in bow tie and bare feet, we meet Donna Harper. When she’s not working at the local ABC radio station as a journalist, Donna turns out some of the best mushrooms around. The two are obviously well acquainted and a cheeky banter is quickly struck up. Hughes is a fortnightly guest on her popular talkback show, swapping recipes and talking about the latest produce coming into season.

But the market is not just a commercial outlet for local, low volume producers, it’s a statement about the quirky little town’s ferocious independence. Only recently, carefully screened “guest growers” have been permitted to offer their goods alongside local farmers. Today it’s white cherries from Orange.

“Let me introduce you to Martin and Pam,’ says Hughes gently ushering me across to a relaxed couple quietly enjoying a sample of the out-of-town cherries, “Martin grows the best macadamia nuts around.”

Martin and Pam turn out to be the owners of Brook Farm, a boutique producer who have found fame outside the mass market, supermarket melee that has damaged so many others. Yes, you’ll find Brook Farm macadamia yoghurt muesli on your first class and business breakfast trays in Qantas aircraft as well as the lounges.

“We resisted going to the big two supermarkets because there is inevitably a compromise in quality one has to make to meet the prices imposed by these guys,” says Martin, casually pulling a cherry stalk through his teeth. “Word-of-mouth (excuse the pun) has really been our best marketing tool.”

As Hughes directs his team from a roughly scrawled ‘battle plan’, the produce is packed back into the van along with the guests and the whole operation is wrapped up in about an hour.

“It really gives me a good feeling,” says Hughes, who has been with The Byron since day one in 2004, “my kids go to school here and we live and work in the community on a daily basis. It’s a simple, pro-active thing to do and generates heaps of goodwill. Hey, and it’s fun too!”