This new alliance brings together Europe’s leading exhibition associations in a coordinated effort to promote awareness of the vital contribution that the exhibition industry plays to economic development and job creation.At the top of the EEIA’s action list is the promotion of the exhibition sectors’ common interests towards the framework setting authorities in the EU. 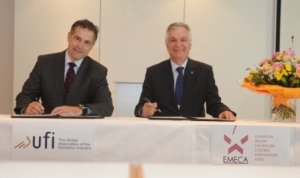 UFI and the EMCA have teamed up to launch the European Exhibition Industry Alliance.

Arie Brienen, UFI President, described the objectives of this new structure, saying “the exhibition industry is making a vital contribution to Europe’s growth agenda and we need to make sure this is much more clearly understood across the EU. It makes sense that the key industry groups should work together to present a single face and single voice to ensure that we’re heard in Europe. UFI has members in 24 of the 27 EU member countries while EMECA represents the largest and most powerful exhibition centres across the region.”

The EEIA mandate calls for it toactively present a strong and clear voice on all exhibition industry related issues to the European Commission, the European Parliament and other important European stakeholders.

Dr. Piero Venturelli, EMECA President, applauded this joint industry initiative saying, “EMECA is very happy to join forces with UFI. The European trade fair sector is a key player in the international exhibition market. Our 19 EMECA members are proud to be part of this exciting new venture. With our office in Brussels, we are already in the heart of Europe. Together with UFI, we will be even stronger.”

EMECA and UFI will cooperate closely to develop the work scopeof the new Brussels based industry alliance. The EEIA will monitor EU issues and inform members about relevant developments. The fostering of a European operational environment favorable to the exhibition industry sector is the alliance’s ultimate objective.

It is anticipated that the EEIA, with a start-up date of July 1, 2012, will be fully operational before the final quarter of 2012.