Previously announced March 2013 dates have been revised as exhibition space at the Melbourne Convention and Exhibition Centre (MCEC) became available in February when the show is usually held. 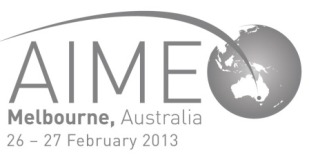 “February best suits the industry diary and allows AIME to remain the first meetings and incentives event on the year’s calendar, so we’re really happy with the revised dates for the 2013 show,”  de Swart said.

Karen Bolinger, chief executive fficer of the Melbourne Convention + Visitors Bureau (MCVB), which owns AIME, said she was pleased that space had opened up at the MCEC.

“Over the last two decades, AIME has traditionally been held in February, so we are delighted that the revised dates will ensure the show is consistent with previous years,”  Bolinger said.

AIME 2013 will bring together exhibitors, Hosted Buyers and visitors from the meetings and incentives industry from around the world to network and do business over the two-day event.