Advertisement
Developers, planners, business leaders and professionals from all walks of life have descended upon Fremantle this week for the seventh biannual Mainstreet 2009 conference.

Developers, planners, business leaders and professionals from all walks of life have descended upon Fremantle this week for the seventh biannual Mainstreet 2009 conference.

“The conference theme, Rediscovering the Heart, invites speakers and delegates to explore why mainstreets are again becoming the heart and soul of city and town centres across Australia,” said Mainstreet 2009 chairman, David Duncanson. 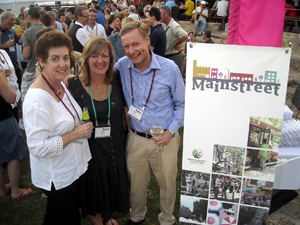 Held over four days, Mainstreet 2009 features lectures and workshops led by policymakers, practitioners and researchers, and gives delegates the opportunity to see urban developments across the Perth metropolitan area.

The conference is being held at the Esplanade Hotel, with Cicerello’s waterside restaurant hosting the opening ceremony on Sunday (Mar 15).

“The Mews Park area just adjacent to Cicerello’s was the perfect setting for guests to meet each other and network as they enjoyed a mix of oysters, prawns and other seafood delights, matched with a glass of wine or beer,” said Cicerello’s owner, Henry Liascos.

“We wanted to ensure there was a lively atmosphere, so we also had a guitarist on hand, local craft stalls and a magician who mingled with the crowd, ensuring guests were left with a lasting positive impression.

“There really is no better place to enjoy the absolute best of Fremantle, particularly when you’re introducing a group of delegates to the conference’s host city,” he said.