Advertisement
With their strong reputation as providers of quirky corporate entertainment for the past decade, Rotorua's historic Blue Baths have come up with yet another winner.

With their strong reputation as providers of quality, and often quirky, corporate entertainment for the past decade, it’s no surprise to discover Rotorua’s historic Blue Baths have come up with yet another winner. They have made a movie to add even more value to their popular ‘Stars at the Baths’ theme offering.

A black-and-white home movie set to 30s music, the new ‘Stars at the Baths’ addition eloquently expresses the heady days of the Bluey’s heyday; a time when children swam at the pool after school every day, dive-bombed each other from the high tower and spied on the weddings held upstairs on a Saturday. 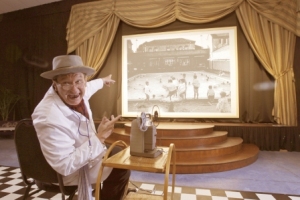 Set to the music of the 1930’s the new ‘Stars at the Baths’ film shows the property in its historic heyday.

Blue Baths Establishment managing director Jo Romanes says the new movie, along with their other new developments; support the company’s philosophy of continually striving to add value to their offering; something which is particularly important for repeat business clientele. She adds those who have already seen the movie, launched on November 4, have praised it for the warm memories it evokes.

“It really helps show-goers get an authentic sense of the Baths history – and how truly daring it was to enjoy mixed sex bathing (a first in New Zealand) amidst the building’s ultra-glamorous 1930s surroundings,” says Romanes.

The addition of a miniature Harley Davidson (ridden by Elvis in a rhinestone-encrusted Lycra bodysuit), new songs, new costumes, a more dramatic stage entrance and new draperies, plus the addition of a specialised sound and lighting person and a stage manager to the team all add to the total package.

The entertainment offering even includes Elvis on a mini-Harley Davidson

Using the music of the Andrew Sisters, the Rat Pack and the King through to ABBA, Dusty Springfield and Tom Jones to recall the building’s seven star-studded decades of existence, ‘Stars at the Baths’ is one of six Blue Baths’ signature themes.

As every function is individually tailored to suit the needs of individual corporate clients, the ‘Stars at the Baths’ show can form the basis for an entire dinner and entertainment package for a gala dinner. Alternatively it can be more of a pick and mix version of the show to suit a particular occasion. Clients can utilise the show’s characters to mingle with guests on arrival, help seat them, choose parts of the musical line up, add more dance music or even choose to have ‘Stars at the Baths’ as part of a mixed showcase of musical highlights from other theme shows: Pirates of the Blue Pearl, Manic Mad Hatter, Roto-Vegas Casino, The 30s Show and Golly Gosh, it’s Mr OSH (rejigged to an OHS theme for Australian clientele).

“It’s all about delivering a special experience for our clients,” said Romanes.

With ease of direct air access into Rotorua assured since the commencement of direct Trans Tasman flights in December 2009,  Romanes adds their Australian clients have also begun to utilise the company’s customised multi-day package options suited to a Tuesday arrival/Saturday departure to tie in with Air New Zealand’s current Rotorua-Sydney flight schedule.